Looking to join or renew your membership? Pay now

September 2017 saw 20 of us at the Sussex triathlon held at Ashburnham Place. After a busy season competing in events including super-sprints, sprints, Olympic, middle, standard and even double standard (see James Fargus’ race report) we rounded off a successful season with an outing to the Sussex Triathlon. If you’ve not been there before, Ashburnham Place is set in beautiful Sussex countryside, offering a spiritual retreat.

Some of the group arrived early and stayed in cabins, enjoying the weather, food and carb loading in liquid form!

The start was a typically early affair, with mist hanging low over the beautiful lake while competitors arrived, racked their bikes and got ready for the start. As a location, it takes some beating, and is wonderfully tranquil. 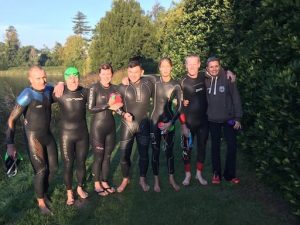 Our competitors were early out of the water, up the hill and over to transition.

Once the lake was clear, the Middle and Sprint distance competitors took their turns. 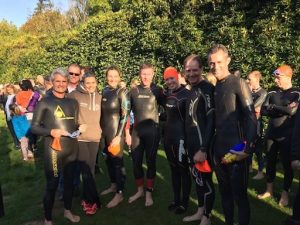 As all the competitors made their way onto the rolling bike leg the weather started to warm up nicely as the early chill quickly burnt off.

The ride is on open roads, and there are a few hills thrown in for good measure.

Transition started to fill up as the riders returned for their run leg around the lake and past the house itself, largely through wooded countryside. It’s a beautiful run, with one hill designed to remind the legs that this is no picnic!

The event was well attended, and we were delighted to pick up some trophies across several categories.

A group then rounded the weekend off with a BBQ and some much needed rehydration.

Many thanks are due to Mark S for organising,